Apple did not reveal its iPhone 7 sales of opening weekend this year. However, the third party statistics data showed its sales make even with its predecessors’. 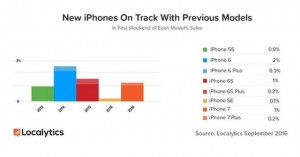 iPhone 7 is available in some countries and regions now. According to the statistics data from Localytics,  iPhone 7 and iPhone 7 Plus penetration are respectively 1% and 0.2% since the release.

iPhone 6 was the first big-screen edition which released in 2014. Its two models won a great popularity from the market. It even hit the sales record in Apple history. The statistics showed that iPhone 6 penetration reached 2% after opening weekend.

In recent, Apple announced that iPhone 7 Plus equipped with dual cameras would be out of stock soon. What’s more, the American and Japanese operators made hits in pre-orders in its history.

However, the Wall Street and American media felt negative towards the sales of iPhone 7. It still applied the body design of 2014. Apple just upgraded its flash memory and released dual cameras which is far from the expectation from market.

The Nikki news reported that Apple cut 30% of component orders this year as it lost faith in iPhone 7 sales performance. Apple encountered the first sales decline in 13 years owing to drag of iPhone 6s. In addition, Apple iPhone sales declined by 15% in Q1 and Q2.