An eight-minute AR film introduced Tokyo with sports, technology, games and animation at the closing ceremony of Rio 2016 Olympic Games. 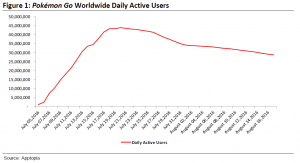 Among those Japanese culture symbols, Mario plays an important role. Nintendo benefited from this introduction with stock price increase. It is a bit pity that Pikachu, a symbol of Pokémon Go did not show up in the film.

The market made some bad feedback concerning Pokémon Go. According to the figures of Bloomberg, players show less interest in playing Pokémon Go now.

The daily active users of Pokémon Go came to its prime in the late of July, then it started declining. The Pokémon Go engagement also suffered decline.

Pokémon Go has a great connection with AR technology due to its game feature. Players play this game based on AR technology.

A data made by Google Trends showing that the attention of AR has been increased thanks to Pokémon Go, but AR attention also suffers decline as fewer players play Pokémon Go. In the meanwhile, the attention of Virtual Reality technology keeps stable.

Pokémon Go hasn’t been introduced to mainland China yet. Its prime attention occurred in mid July and then declined after a week.

It enjoyed a great popularity when Pokémon Go was just introduced to a new market. For example, it attracted a great amount of players in Pokémon Go stops or gyms a month ago in Hong Kong.

The popularity of Pokémon Go recorded the development of smartphone on the other hand. Time will tell us how far Pokémon Go goes.