The game named Fallout Shelter has been accepted by the customers and it runs quite well on the App Store. Fallout Shelter’s sales performance is running good and it is making more profit for the vendor than Candy Crush Saga does. 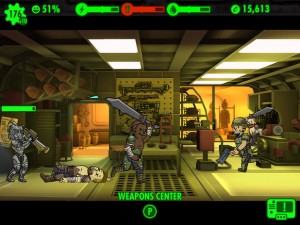 App Annie collected the data that indicates Bethesda’s base building game reaches the fourth highest grossing iOS app in the United States. While the Candy Crush Saga ranks in the fifth according to the data.

The other top three highest grossing games before Fallout Shelter are Clash of Clans, Game of War- Fire Age, and a music app Pandora Radio.

It is said that Fallout Shelter’s success in finance can be attributed to the sale of in-game lunchboxes, along with the feature the players can purchase to help the game characters keep running fast.

It is not the only way to invest to gain financial success as the game can earn more money via the players’ playtime along.

According to the report of GL.biz, the developer has not unveiled how much it earns through its game Fallout Shelter, however, Candy Crush Saga earned $ 2 billion each day during the spring season of 2015 by targeting on all platforms.