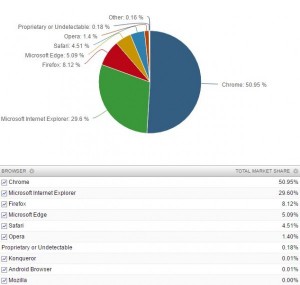 Edge browse just maintained its users in June, 2016. It still needs to take time to win more users to rival Firefox and Google Chrome. In fact, the user share of Google Chrome keeps increasing each month.

Though the worldwide market share of Windows 10 increased by 2% in July, it did not help much for Edge to obtain more users.

By now, Google Chrome ranks No.1 among PC browsers, with a total market share of 50.95%. Microsoft IE market share comes with 29.60%, but it keeps declining as Microsoft just upgrades patches instead of upgrading new features for this browser version.

So far, worldwide market share of Mozilla Firefox among PC devices accounts for 8.12%, while Microsoft Edge is just only 5.09%.

Microsoft aims to obtain more market share of Edge with the Anniversary updates of Windows 10. The major Windows 10 anniversary update for Edge is to offer it plug-ins. Microsoft plans to support Edge plug-ins on Google Chrome without changing any plug-ins.

In the meanwhile, Edge will be upgraded with more features, such as Touch gesture navigation and other performances based on Touch devices.

There is no doubt that Edge has great potential to increase market share. However, it needs to keep upgrading its performance to catch up with Google Chrome.